Posted by NicVaughan on Jul 21, 2014 in Uncategorized | No Comments

This next photo might have been the most exhilarating wave of my life, which was followed by one of the most intense beatings I have ever had to withstand.  I am glad my fitness is where it is, otherwise things might have unfolded differently.

It was mid afternoon with a bit of texture on the water, low tide and scary. I hadn’t caught a wave in a few hours and finally saw this monster on the horizon. As I’m paddling down the face and go to stand up, I see the bottom drop out and I’m thinking “Oh $#!+, do I hit the eject button or try to pull the airdrop of my life on a 9’4″?” I grabbed my rail, felt myself go weightless, and before I knew it, I’m at the bottom of the wave still standing.. As I bottom turn up into the wall, the spit blasts me in the back like a firehose and I’m completely blind. I did my best to hold my line and as the spit cleared, I found myself going mach 10 towards the shoulder, only to hit a chop in the flats and sprawl out into a graceful belly flop.

Since this swell was so long period, instead of “X” number of waves per set, it was more like “X” minute long sets.  With that many waves slamming into a beach break, the water needs somewhere to go and thus, creates these river-like rips that trash the face of most of the waves you might have had a chance of making.  When the opportunity arose in which a wave with a shoulder focused itself within your sphere of possibility, and that had a runway unhindered by the rip, it was imperative that you went.  At this point, you really aren’t considering whether or not there are waves behind it because most likely there are, and you are going to have to take them on the head if you don’t make your wave to the beach.  Lastly, Puerto has a way of pushing you right back out to the impact zone, as opposed to blasting you towards the beach when you’re caught inside.  This is why the flotation vests are a necessity out there on any big day.  In my case, I had a flotation vest for the morning session, but after being mowed over by a right I rode (photo attached), my vest was ripped square in half down the chest and off my body.  Without a backup, I foolishly paddled out for the afternoon session vestless, and found myself in the exact situation described above.  So after “belly flopping” in the flats on the left, I came to the surface to find myself being sucked out and right into the impact zone.  I took ten waves on the head, no exaggeration, and each time struggled to the surface only to get a mouthful of foam and a glimpse of the next one looming before being sucked back down into the soup.  The soup in Puerto has about an 18 inch layer of foam that seems to pull you down like quicksand.  Finally, the set let up and I barely wrestled up onto my board, and with the weakest half paddles, slapped my way out past the impact zone.  I was seeing white blotches at this point, completely drained and realizing that if there had there been three or four more waves, I seriously might have drowned.  As you can imagine, I was relieved but then quickly realized, “$#!+, I’m out the back again.. which means I need to paddle for another one of these?!  And actually make it!!”  Needless to say, I kissed the sand when I finally touched land. 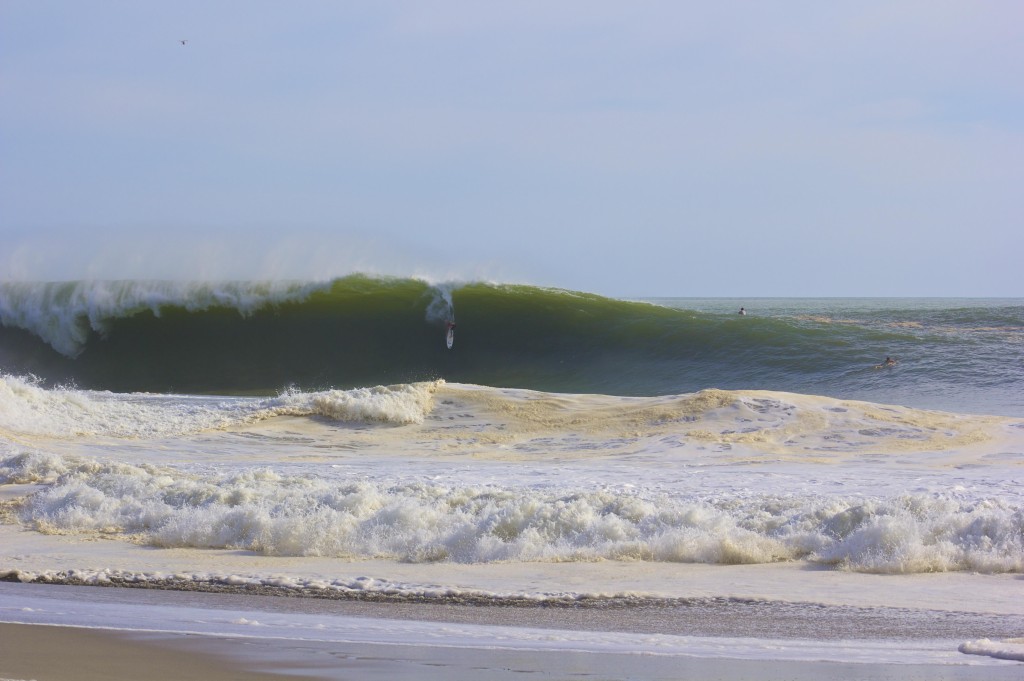 Here is a fun left from the following day as the swell began to fade.